We can do more than one thing. Creativity can help with both parts of the COVID19 brief, and each is valid.

For this post, I wanted to address a train of thought which has been prevalent in the creative and marketing spheres as the world tackles the pandemic. This is a sector that loves to critique itself, everyone has an opinion and, of course, that means I have one too.

I tend to believe that most people are good. Consequently, when I see our industry’s immediate response I err on the side of assuming altruistic, positive intention. The immediate response was, in many cases to produce ‘social distancing’ riffs of brand assets: McDonald’s’ separated golden arches, the Olympic and Audi rings underwent similar treatment and so on. This was easy, repeatable. Evan Nicole Brown in Fast Company witheringly referred to this as equivalent to the vacuous well-intentioned ‘thoughts and prayers‘, others likened it to the virtue-signalling trope of changing a social media avatar, some might say simple opportunism.

But this misses the point. Changing your avatar when a terrorist event happens is an ex post facto acknowledgement of sympathy, changing it to a rainbow signals a commitment and solidarity with LGBQT+ rights. We can debate the worth of those actions at another time, others already have done. The fact that brands have done this in the past (Mercedes Movember 3-point star anyone?) meant there was precedent, it was easy to sign-off and reproduce. But it wasn’t worthless. In the COVID19 instance the logo split is instructional, perhaps derivatively so, but it’s an acknowledgement of the steps we all need to take to stay apart; it might not be original, but communicatively speaking it’s actually doing a job. It’s also only part of the story.

Because, while social distancing is dealing with the preventative part of the pandemic (flattening the curve), the other element is the tangible action that brands and organisations are undertaking to improve our ability to respond to the healthcare crisis. In this instance we have seen equally derivative responses: huge amounts of 3D printing hacks to produce protective equipment or make it easier to use. Repetition here is inherently valuable! More is indeed more. Bring on the bucket loads of brewers and distillers making hand-sanitiser, the optimised venturi valves or retrofit respiration aids to Decathlon scuba masks. We’ve seen creativity in digital environments that support frontline health workers with food delivery, symptom tracking, transport and mental wellbeing. I was delighted to see Welsh denim manufacturer Hiut start making scrubs.

There’s no reason that all of these approaches cannot co-exist, and when pontificating columnists and the quick-fingered Twitterati hammer out their (equally derivative) shut-downs of the latest ‘lazy’ work: “It’s a pandemic, not a brief” sighed Anselmo Ramos (1k likes)  that’s when we snuff out the little flames of applied creativity that might just have made a difference. Of course, one logo separation looks the same as another but added together when everyone’s saying the same thing is the message diluted and ignored or is it normalised, does it make us all accept that spending time distanced and apart is the right and normal way to behave right now? I’d say it does, and that’s a good thing. There are other ways to communicate the same point: Volvo for example, if it still sounds like it came from your brand, so much the better.

Finally, there’s an important element in this approach that concerns accountability. Responding with even a low-level logo change does assert that the brand understands and cares. Anything which the organisation then fails to do or runs counter to that is damaging and perhaps this is the point others have tried to make. If you separate your logo and do literally nothing else or make your employees or customers suffer by your actions and policies then more fool you. Equally, brands don’t absolve themselves of the need to edit and interrogate the value of their work, many should have asked themselves whether emailing their customers to tell them that their employees were ‘washing their hands and had sufficient space between them in the factory and might you like 10% off stock’, was likely to be a welcome reassurance or simply an opportunity to unsubscribe (as they’d forgotten to when the GDPR emails went around). 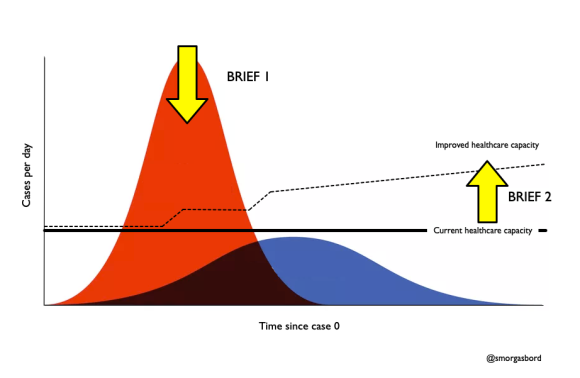 There are two briefs to respond to. Why is only brief 2 considered worthwhile?

I’d return to Mr. Ramos and others and say there is a brief. A brief with two objectives:

On the second part, Ryan Wallman and Tom Goodwin seemed to suggest that ‘marketing people, ad people’ lacked the intellectual heft or credibility to tackle these problems (“our understanding is always facile“), particularly if they were approaching this from the naivety of youth (<27) .

One really does not need to be an epidemiologist to produce work that responds to either the problems so clearly defined in those two distinct parts above, and I really don’t think I’ve seen a single brand or marketeer try and solve the problem at a virological level.

There is also room to have fun and interventions and creativity might not seem so obvious as solutions to the brief but can be strongly connected. I’ll return to this perhaps in my next blog as we address the implications of lockdowns and restrictions that last a prolonged period of time and we find ourselves struggling to sustain the momentum and need other ways to maintain that downward pressure on the curve.

Aside from the irascible and cynical commentary on the first salvos of marketing’s response to COVID19 there has nevertheless been some helpful and measured guidance. Renata Mittnacht and Carly Gibson of Ogilvy NY produced a simple checklist and accompanying social media guide which certainly helped us at Spark44 edit responses to the pandemic for our client, Jaguar Land Rover. This guide reminds us to think carefully about tone, opportunism, the contribution to panic or anxiety, the assumptions we might be making and the impact of behaviours we might be encouraging. Of course, it also encourages us to ensure the brands we work with are contributing in a meaningful way through their wider Corporate Social Responsibility remit. It’s this sort of constructive filter we need to apply.

Please, even if you’re allergic to unoriginality, dial down the crit and allow some of the wildly-sown creative seeds to take root (help thin them out by all means) but we really need to be tackling this en masse because I’ve already illustrated above, we’re seeing some truly inspirational piece of design, coding, science, engineering and psychology being unleashed on the vicious virus.

When Matt Kandela concluded  that as creatives our final response shouldn’t be “well, perhaps we change our logo?” I found myself answering that of course, it shouldn’t be, but if that’s where you choose to start your part of the response, that’s ok too.