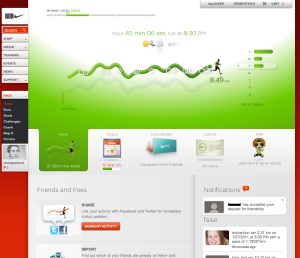 Nike's attempt at social fitness has an Achilles heel

For the poor, unfortunate souls that follow my musings on Twitter and Facebook it will be rather apparent that I am training to run a marathon this year. Each time I return from one of my sessions I synchronise my iPod with Nike+ and the data from that effort is shared across my social networks. It’s probably a little annoying for people as it is issued as a mindless broadcast but it is important to me to share it with certain people within my friendship group – there is proof that sharing accomplishments like this with your peers makes it significantly more likely that you maintain the motivation to continue. It’s a topic for another post maybe, but it would be nice to exclude certain people from seeing the postings without relying on them to block it. In any event, I think sharing my marathon training is a lot more meaningful and socially acceptable than telling someone that I’ve just bought some chickens on Farmville or that I’ve checked into my local Subway. [NB. I do not use Farmville or 4square].

My beef isn’t so much with this posting behaviour but rather Nike’s desire to incrementally enhance their Nike+ offering without fixing the core functionality on which it relies. To take a step back, let’s look briefly at the tracking and personal data movement. I wrote some time ago (post now deleted sadly) about the rise of personal data logging and how it was peverse, though not unwelcome, that we were seeking data on the most basic elements of our daily lives. Running is a simple endeavour, yet we are now surrounded with an array of methods to track our activity; just as a quick snapshot:

Garmin
Garmin’s Forerunner and similar personal GPS devices track your runs and display the core data in a personal profile page that can easily be shared.

Runkeeper, Mapmyrun, Endomondo
Similar to the Garmin implementation – these are often smartphone apps that use GPS to track your runs. Some integrate with Polar or ANT heart rate monitor straps to overlay cardiovascular data (so, ‘effort’) on the route and pace (‘output’).  These seem to be the most popular in my social media stream at least, if I go to the Runkeeper site it even tells me directly which of my friends are using it.

Nike+, Adidas miCoach
Both sportswear giants have their own systems – Nike were first with their iPod-integrated solution and as Adidas have moved on, their focus has been on realtime coaching as opposed to ex post facto analysis. But, as we will see, Nike+ is not a simple universe…

Others
Of course there are loads more – Timex, Samsung … almost every smartphone and sports timer company have something and there are a bunch of opensource implementations too.

So, to return to Nike+ (since it is the system I use), let’s understand a little more about the offering.

Nike+ and iPod: At it’s most basic, your iPod forms the user-interface to a system that uses a shoe-based sensor to track your stride length and establish a distance run, with all the additional statistics around pace and time. This implementation varies on the age of the iPod and the additional equipment (e.g. heart rate strap). Synchronising your iPod after the run uploads the data to the Nike+ site.

Nike+ and iPhone: There are two implementations here, a native application that does little more than the iPod version above, and then the Nike+ GPS app – a free download which uses GPS tracking to trace your runs and – because it’s connected to the web – additionally allows friends to cheer you on via Facebook comments.

Nike+ GPS sportswatch: The latest development showed-off at CES this winter, a wristwatch powered by TomTom to rival the Garmin offering, taking the basic GPS functionality of the iPhone app and simplifying this to a watch interface at the same time as integrating with heart rate data.

The fact is, this product offering is now more than a little confusing. As an iPhone user I am able to track my run using any of the free apps from Runkeeper, mapmyrun Nike+, Adidas and so on. As an iPod user I may also use my Nike+ shoe sensor. So, I sort of need a reason to use one service over any other. The decision needs to be made based on a few things: Which device gives me the best data? Which device is least hassle (bulk, user-interface) and, crucially, Which device/service are my peers using?

Before the smartphone app trend it was a given that most people were using Nike+ or, possibly, Garmin. Nevertheless it was still tricky to find friends using the service and then compare your efforts. With the wider marketplace it’s even harder as people sign-up for a service, use it and move on. To try and differentiate their service and encourage participation, Nike + continue to innovate. Recently they launched Nike+ Tag – the premise is simple, runners have to avoid being “it” by beating their friends to longer runs, faster speeds or getting up and running earlier in the day.

The trouble with this – and the many other connected challenges on Nike+ – is that they are predicated on having a (wide) circle of friends using the system. In the case of tag, your friends also need to have the particular app and, as we have seen, many may simply have one of the other Nike+ devices. Unfortunately (and after several lengthy paragraphs we are finally at the point of the post) the system for finding friends is fatally flawed. Nike seem to have a long-standing problem with the friend search function within Nike+ on Gmail. Unlike numerous other sites, you cannot import other social network friends only search for signed-up friends via Gmail (which doesn’t work) or by using the native search (which won’t discover your friends if they’re profiles are set to private – which is the default). The end result is that despite having 700-odd people in my Twitter contacts, a hundred or so in Gmail and 300+ in Facebook, without being able to scan for them I have found a grand total of about 6 on Nike+ and most of those are infrequent, lapsed runners. Tag, despite being exciting and well-considered, is all but useless to me (I’m not the only one).

It makes no sense to me that you would build a service that relies on the motivation and challenges of friends and then have such a limited social connection engine. I am quite sure this isn’t the intent but the lack of attention to fixing the technical problems with it jars somewhat with the attention to rolling out new features that rely upon friendship. It all smacks of the same criticisms that continue to face Apple’s Ping:

“Without importing existing networks from Twitter or Facebook (inviting friends through Apple Mail is not enough), there’s a significant investment of time needed to set Ping up. Now social networking is more mature, there’s less appetite for putting in that groundwork – and why should we have to when our networks already exist?” – Jemima Kiss on Ping (Guardian2 ix 2010)

It is peculiar that at least the connection to post my output works largely flawlessly, runs are posted automatically to twitter and Facebook with a near 100% success rate. It’s a touch disappointing then that the simplicity of the service that  first attracted me has been replaced with a complexity in offering designed to retain me (via unsolicited feature-creep) is so hamstrung by fundamental technical flaws that I crave a more simple, socially-integrated solution that increasingly looks likely to exist amongst Nike’s competitors instead.

For the record, my Nike+ profile is smorgasbord, please drop by and be my mate.